We often receive messages from visitors on TheAnou.com if we can provide the contact details for an artisan in the Anou community or directions to their shop. Unfortunately, we are no longer able to do this. Several months ago, Anou’s artisan leaders decided against both fulfilling these requests and publicly listing the directions or GPS coordinates to artisans within the Anou community.

It wasn’t always this way. Prior to this decision, we provided directions to anyone who asked. However, we started receiving complaints from artisans that some visitors showed up haggling for discounts or imposing industry standard wholesale discounts. The artisans would ask why we would send such visitors to them when such requests are against the Anou community’s vision? It was a fair question. We tried doing informal chats with people who requested to be put in touch artisans so we could ensure that they knew the values of Anou’s community. This didn’t really work either. This problem culminated when a visitor got entangled in the politics of the cooperative they were visiting due to the often non-transparent practices that can occur with in-person sales. Since we sent the visitor, we were responsible for what occurred. The decision of Anou’s leaders came shortly after.

What we have learned is that customers of Anou’s online store, particularly recurring ones,  do understand our vision and we have had no problems putting them in touch with artisans on their trips. So if you’re a recurring customer of Anou’s online store we’re more than happy to work with you so you can visit artisans within the Anou community or recommend tour agencies that support the artisan community’s vision. If you have any feedback or thoughts, let us know in the comments below!

Ever wanted to buy something from Anou for your friend’s wedding but had a hard time trying to figure out what might fit perfectly in their new home? Well, worry no longer, you can now buy a gift card for them on Anou! Even if your friend can’t find the perfect item, he or she can have an artisan custom make something just for them!

Here’s how it works:

1 – E-mail us at hello@theanou.com and let us know that you’d like a gift card.

2 – You can pick any amount that you want to give. For example, a $1.47 gift card if your friend gifted you a paper towel rack that you didn’t even want for your wedding. Or a $10,000 gift card if you know your friend has always dreamed of upholstering his or her new house entirely with Moroccan rugs.

3 – We’ll e-mail you a printable PDF (see below) that you can print. For an extra $2 USD, we’ll print the gift card for you and have it sent from Morocco straight to your friend’s home.

4 – Don’t worry, there are no annoying rules like expiration dates. Your friend can wait as long as they want before they make their purchase.

If you have any questions, just let us know at hello@theanou.com and we’d be happy to help. So spare your newly married friends yet another toaster or dishwasher and give a gift that matters. What are you waiting for? Select from one of many photos of your favorite associations or cooperatives and we’ll put it on the front of your gift card. 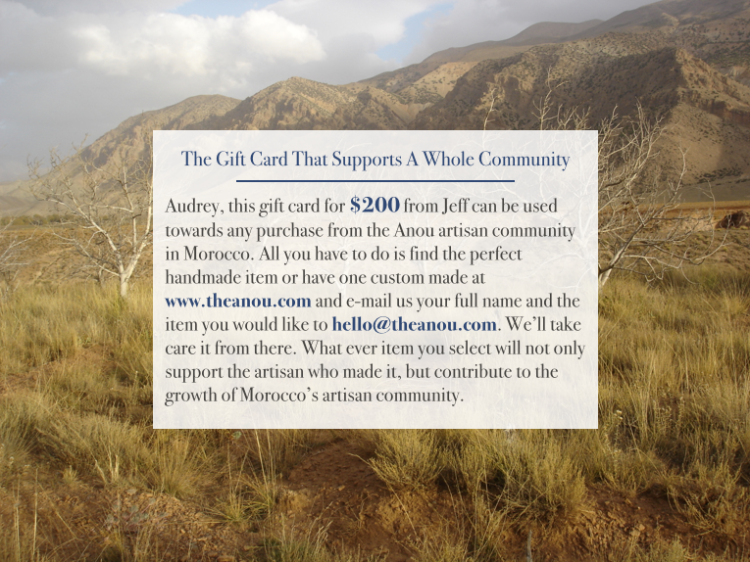 The backside provides instructions for how to redeem the gift card. These images can be provided in PDF for or be sent directly to an address you choose!

After talking with Anou’s customers during the past several months, we’ve learned that they all share at least one of four characteristics. These characteristics are those who 1) have been to Morocco in the past or are planning a visit, 2) are socially conscious travelers and consumers, 3) have met an artisan in person during a previous trip, and lastly, 4) have a solid understanding of Anou and the fundamental role Anou plays within the artisan community. The more of these characteristics a customer had, the more likely they were to be champions of Anou and help us spread the word about what Moroccan artisans are doing  to create equal access to local and global markets. This sets the framework for how the Moroccan artisan community can best market itself.

Our goal then is to ensure that every socially conscious traveler coming to Morocco knows about Anou and the role it plays within the artisan community here in Morocco.  However, the big question is, how do we do that?

While being featured in the Lonely Planet helps tremendously, Anou’s most effective marketing strategy is when artisans are responsible for marketing themselves. The logic behind this is pretty simple:  almost no one believes that Anou is not a middleman until they hear it from the artisans themselves. Therefore, we must connect tourists traveling through Morocco with artisans, so that artisans can explain Anou in their own words.

As such, during the past several weeks we’ve been reaching out to socially conscious riads, tour agencies, and other businesses to see how we might be able to connect their clients directly with artisans in the Anou community. Our initial conversations have been incredibly promising.

One of the exciting ideas we’ve discussed is providing socially conscious businesses exclusive directories of Anou artisans. Take a look at this sample guidebook we put together for Dar Roumana in Fez. Such guidebooks will easily help riads like Dar Roumana create truly authentic experiences for their guests that go beyond typical, uncomfortable experiences with middlemen in the medina.  In return, these businesses will agree to take no commission from the artisans when their guests visit Anou artisans. In addition, they will help us inform their guests about the artisan community and the important role Anou plays within it. Many of these ideas have been outlined in a draft Memorandum of Understanding that we’re still modifying as we try and find the right blend of idealistic, and realistic, ideas.

E-mail us at hello@theanou.com and let us know why supporting the artisan community in Morocco is important to you! We’ll look forward to hearing from you!

Earlier this year, an Anou artisan leader trained a group of candle makers on Anou. We were excited to bring an immensely popular request online for the very first time. The group posted a couple of candles online during their initial training and after a month or so they made their first sale.

The leaders grew concerned because if an artisan does not fulfill their product, it doesn’t just reflect poorly on the candlemakers themselves, but on the wider artisan community. The leaders increased the pressure on the group, even suggesting that a leader would travel out to their town to send it for them if it wasn’t sent soon.

Eventually, the president reached out and said they wouldn’t send the candle because business wasn’t very strong. All the president had to do was send the order and they would receive their payment, and likely, they would have received more orders from the same customer. Orders, it seemed, was exactly what they needed. The artisan leaders quickly concluded that the president wasn’t motivated. Yet when situations occur that don’t exactly add up, it is a huge red flag that something behind the scenes is wrong.

The Disintegration of an Artisan Business

The leaders kept pushing and eventually the president shipped the order. Several weeks later, a leader received a call from the president saying she no longer wanted to sell on Anou. Instead, she just wanted to focus on selling to tourists and at craft fairs. We were concerned: Did Anou do something wrong? Was there any confusion about how Anou works?

The president hesitated in sending the candle that sold on Anou because she’d have to pay them now knowing that the rest of the women actually knew the final selling price on Anou. According to the women, prior to Anou they had always been paid a much lower amount than the price now listed on Anou. Yet even after the women were made aware of the actual selling price on Anou, the president still paid them the lower amount that she had always paid them. Feeling cheated on top of a whole host of other problems, they all quit in protest. As of today, the candle group no longer exists and their account has been shut down.

The Need for Transparency

The story of the candle group illuminates the environment that the vast majority of artisans operate in. Many artisans, if they belong to an association or cooperative, are not even aware of what their own group sells their products for, much less the price it is resold for by a reseller. Sometimes, artisans don’t want to even know because it can complicate the fragile operations of the group. Othertimes, artisans say they simply don’t care to know the price. All this combined with low literacy levels goes to show just how easy it is for artisans to be taken advantage all while creating incredibly unstable working environments.

The importance of transparency, as we’ve written numerous times before, is key for the long-term success of Morocco’s artisan community. This is why we’ve prioritized transparency through tools such as our innovative text messaging system to ensure that every member knows what price their work sold for. When each artisan knows the price, they themselves can hold everyone accountable to ensure that they are paid what they agreed to as a group. This tool has been so effective that many presidents of artisan groups decline to work with Anou because it will likely end their position of power and personal profit. It is why the president of the candle group would rather keep selling at craft fairs, to tourists, fair-trade shops, or wherever else that requires little to no transparency within the group.

Is there ever too much transparency?

Despite the success of this tool, it remains imperfect. For example, does every artisan that receives a text message with the price their product sold for understand what the text message means? Did the text even go to the phone they own? We admittedly haven’t followed up on this after every sale. If we did, we are certain we’d uncover some non transparent practices. In fact, there are two groups currently on the site that we suspect are not paying all their members transparently. Unfortunately, we haven’t gathered enough evidence to intervene and shut down their accounts. The question for us is how far should we go to ensure complete transparency? If we followed up every sale or tightened our transparency tools, would we blow up more groups? Do artisans whose group disintegrates end up worse off as a result of transparency?

As you might have guessed, we are huge advocates of complete transparency. There is much, much more we can do to ensure full transparency of every sale, but we have to act carefully.  Ultimately, our ability to create transparency can only go only as far as the artisans’ customers desire it. Even the most non-transparent groups in Morocco would become more transparent if it resulted in more sales. As long as there are easy ways to sell work with little to no accountability, Anou’s impact across Morocco will be limited. And unfortunately, groups like the candle makers prior to Anou will continue to operate with very little incentive to change.