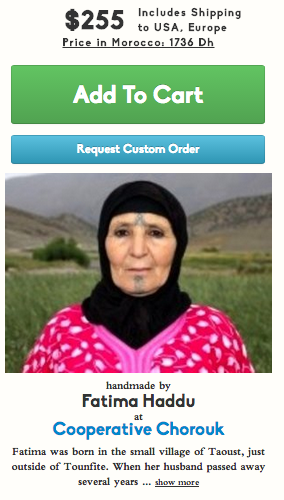 A question that always comes up when we present Anou is, “Can people within Morocco buy from the site?” Unfortunately, our answer has always been no. But starting today, we’ve changed this. You can now purchase products from the Anou community from within Morocco!

All you have to do is is click on any product page and you will now see the price in US Dollars with shipping to the US and Europe AND the price in Moroccan Dirhams with shipping within Morocco. If you want to purchase a product, just send us an e-mail at hello@theanou.com (English, French, or Arabic), we’ll explain the options of payment, and then the artisan will send your order directly to your address in Morocco. 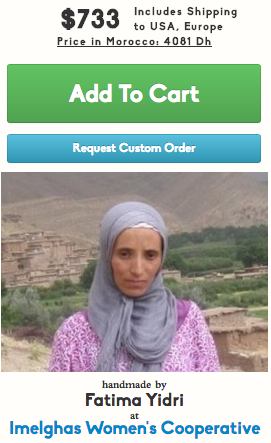 This is an exciting and necessary change for Anou for many reasons.

One reason is because demand for Moroccan products is highest amongst the expat community. And while expats have access to local medinas, they’ve continually expressed to us the desire to buy through Anou so they could know their money was going straight to the artisan in a transparent manner.

A second reason is that it helps Anou create more trust amongst its customers. When customers see prices on Anou that are much more expensive than in the medina, they incorrectly assume it is Anou marking up the prices rather than the fact that Anou’s prices include shipping to the U.S. and Europe. With this feature, all customers will know just how much it would cost to buy in Morocco and abroad — an important piece of information that is essential for Anou’s transparency.

The third reason is that while we expect to see continued sales from international markets, we believe that the market with the biggest potential is the Moroccan market. While this might surprise some, the demand for artisanal products is growing in Morocco. As more and more Moroccans work to promote the preservation of their valuable culture, the pendulum is beginning to swing back. As a result, we expect that Anou’s artisans will begin to ship the majority of their online sales via Anou to customers in Morocco within 5 to 10 years. If you find this unbelievable, then you might be also surprised to learn that the Moroccan Ministry of Handicraft cites that as of today only 8% of all Moroccan artisan sales are exports.

While we’ve only released this feature in the past 24 hours, a cooperative has already made a sale to Marrakech. So if you’re in Morocco and you want to support artisans directly, what are you waiting for?

Yesterday, Cooperative Chorouk excitingly announced on Anou’s Instagram account (read our blog post about Anou’s Instagram account on our blog) that for the first time in their five year history they started to bring more women into their cooperative — twelve women to be exact! Rabha Akkaoui, the cooperative’s president, said that the coop made the decision to add more active members in order to keep up with their increased sales and income via Anou. 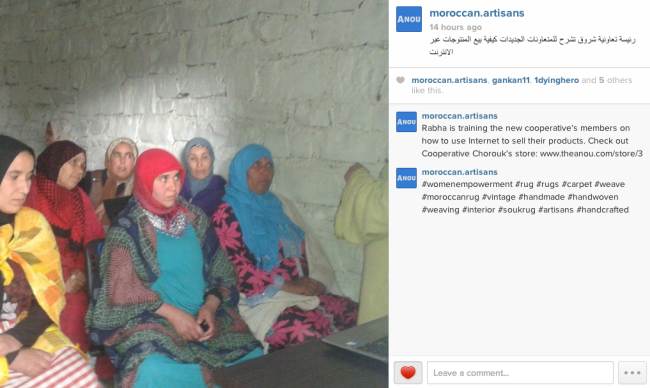 Rabha teaches teaches the new members how the cooperative sells their work online.

Stories like this becoming more common within the Anou community. By becoming an Anou artisan leader, Rabha has traveled across Morocco teaching cooperatives and learning from them and invested what she learned into her own cooperative. As a result, the entire cooperative has improved its photography, pricing, product development and even how it delegates tasks. The cooperative used these skills to increase sales on their own, rather than expecting someone else to do it for them, and now they’re creating jobs in small village.

There is an immense amount of potential to create more jobs in the wider Anou community. We recently completed Anou’s first census, where we structured the census to reflect both active members (those who actively work with the group at least three times a week) and inactive members (those who were once a part of the cooperative, but no longer have work because a lack of sales). The number of active artisans in Anou’s community currently stands at 391 artisans, but if you include inactive members the number shoots up to 883 artisans. In short, if the Anou community increases its sales, the community size and number of jobs could pretty much double overnight.

While still anecdotal, this story shows the immense power of creating an ecosystem that is powered by artisans themselves. When skills are developed and kept within the artisan community, sales and jobs will follow. And with enough time, such stories will no longer by anecdotal.

As we noted in a recent blog post, the Women’s Cooperative of Imelghaus became one of Anou’s top selling artisans. With more sales combined with encouragement from Anou’s community leaders, the women finally started to record all of the material costs and time spent on the rugs they make. The women were shocked at what they learned.

The first rug they began recording on was a beautiful, custom ordered 10’ x 8’ Beni Ourain style rug. The artisans listed the price on Anou for $380. Since the rug weighed over 21 kilograms, the cost to ship it to the US came to $260. Anou’s community fee, which is about 6% of final listed price, added $43 to the price.The credit card payment company we use to process credit cards added $21, or about 3% of the final price. All of this combined set the listed price on Anou for $712. 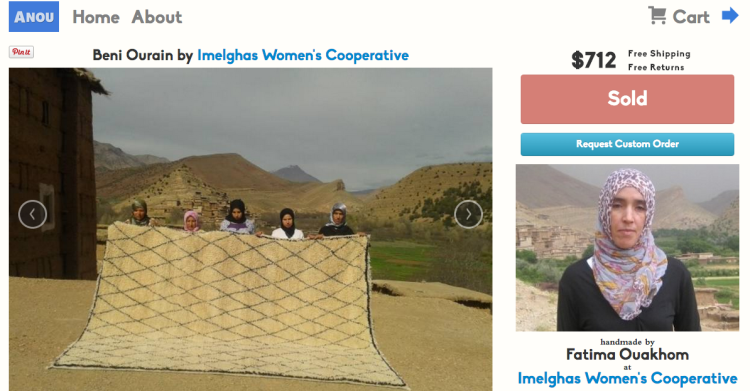 The Imelghaus Cooperative listed their Beni Ourain rug for $712 on Anou.

Providing this much detail in how prices are calculated is unprecedented in the fair-trade industry, but we can learn even more by breaking down the $388 the artisans earned using the material and labor information they shared with Anou. The cooperative recorded that they spent $125 for the wool to make the rug leaving them with a total of $236 for their labor. The women recorded that it took over 280 total hours of weaving. This puts the cooperative’s hourly wage at $.93 USD/hour, or $7.44 for an 8-hour work day. This wage is less than what a day laborer makes in the rural valley where the cooperative is based. It is also below the Moroccan minimum wage for agricultural workers, which is the equivalent of $7.50 per day (learn more about Moroccon minimum wage on Wikipedia or fairwageguide.org). 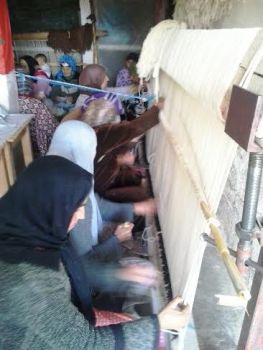 The women recorded that it took a total of 280 hours of weaving to complete their Beni Ourain rug. 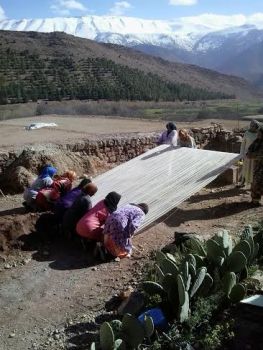 The time spent creating the warp (pictured above) or preparing the wool was NOT included in the 280 hours the cooperative recorded.

The numbers are surprising because they are incredibly low. So low, in fact, that you might think the wages couldn’t get any lower. However, cooperatives are regularly faced with buyers, both fair-trade and regular retailers alike, who request prices lower than what they list on Anou. Worse, it is not uncommon for women’s cooperatives to unknowingly sell their products at price that only meets a quarter of their material costs when selling to traditional middlemen. This is largely why it is not hard to find rugs for sale in the Marrakech medina for prices cheaper than what is listed on Anou.

Take a moment for that to sink in.

With no other sales avenues other than local craft fairs, artisans, much like the Women’s Cooperative of Imelghaus prior to Anou, never have had the knowledge or incentive to push back when buyers want lower prices.

For the first time, the women met and decided that they wanted to increase their pay to $1.70 an hour, or $13.60 a day. This new rate would exceed the Moroccan minimum wage for industrial labor, a big deal in rural Morocco. As such, similarly sized rugs the cooperative produces in the future will now be listed on Anou for around $912 USD, an increase of $200 from their previous price. 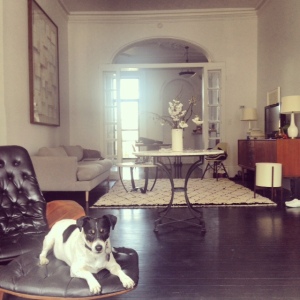 The Cooperative’s Beni Ourain rug at its new home in Brooklyn, New York. Rugs purchased directly from artisans look just as great, if not better,  than the ones purchased from high end resellers.

Recently, Anou was featured in an Apartment Therapy blog post in which they discussed where to buy Beni Ourain rugs because their “popularity…shows no signs of flagging.” The average price of similarly sized rugs listed on their blog (minus the product listed from Anou) was $2,564 USD. This number serves as a good indicator of the average market value for these type of rugs. Imagine the impact a sale would make if the women of Imelghaus could sell their rugs at that price or even half that price. The only way this is even possible is if the artisans are able to sell directly to their customers and customers are knowledgeable about whom exactly they are buying from.

The cooperative’s new price is a lot higher than before but still much cheaper relative to the other products listed on Apartment Therapy. Time will tell whether the cooperative will be able to continue their recent pace of sales at their new price. If they’re not able to, you only have to scan to the bottom of the Apartment Therapy article to see what the future of artisan craft in Morocco looks like if artisans aren’t empowered to sell directly to their customers: 10ft x 8ft West Elm “Moroccan” rugs made in India. Perhaps the trend of Beni Ourain will never “flag”, but it is obvious that the culture and artisans behind this craft surely will if artisans remain dependent on others to sell their work for them.

In a previous blog entry, we noted the popularity of Anou’s Facebook page amongst the artisan community. So much so, our Facebook page has become a better tool for building  Anou’s community than it is at driving direct sales.

The desire to get recognized on the Facebook page by the artisan community has grown so much that Anou’s artisan leaders have been sending me more and more pictures of their cooperative at work or a recent training they completed. As a result, the vast majority of all the images used on the Facebook page are taken by the artisans themselves. Unfortunately, artisan leaders now send me more images than we can post onto Facebook and outstanding pictures sit unseen in my inbox.

One of the greatest challenges we’ve faced with Anou is refining the messaging that artisans not only manage their own online store but also the wider Anou community. As the number of images grow in my inbox, I’ve realized that all the images artisans submit could be our best asset in explaining what Anou is all about.

To address this, we installed a shared Instagram account on the smartphone of each artisan leader at our recent leadership meeting. We instructed the leaders to post as many pictures of them at work, whether at their cooperative or follow up visits with other cooperatives in the coming month. The Instagram account will serve as a live-feed of the artisan community at work. In addition to this, artisan leaders will also post pictures of products of artisans they identified to crowd source whether customers like the potential products or not. This information could eventually provide a more objective means to determine which artisans to train with Anou’s limited budget. 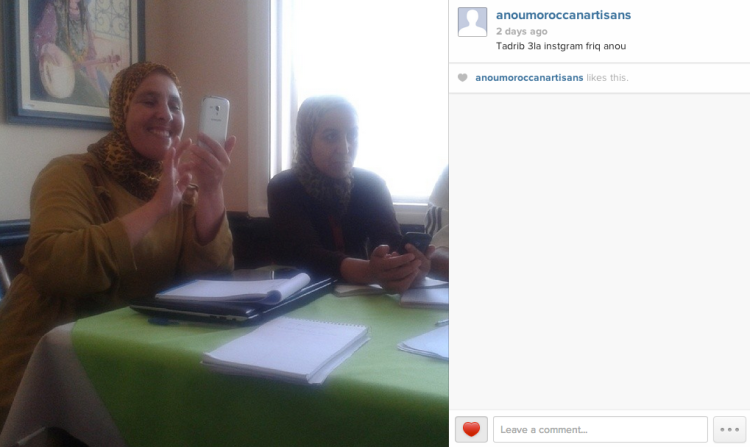 We’ll be piloting this idea for the coming month to see if it gains any traction. If you’re interested in taking part, follow Anou’s artisan leaders as they dive into social media for the first time on their new Instagram account!